It’s tough to get a read on the market these days. For every piece of positive news, there seems to be a bit of countervailing data that may be reason to give us pause.

Yet after stumbling out of the gate last Monday, the market strung together four straight days of gains.

Investors were concerned about the “delta variant” leading to a rising number of Covid-19 cases on Monday, but those fears were soon overridden by a slew of positive earnings results.

Coca-Cola, Verizon, American Express, Johnson & Johnson, and Chipotle were among some of the big winners posting impressive results.

Meanwhile, jobless claims were released, showing the highest level in two months. Manufacturing PMI survey readings for July clocked in 59.7, down from 63.7 in June. (Although a reading above 50 indicates growth, this could be a sign of a possible cooldown).

And in the important but all too often ignored bond market, yields on the 10-year Treasury have plummeted from a peak of around 1.75% in late March to about 1.18% earlier this week, according to CNBC. 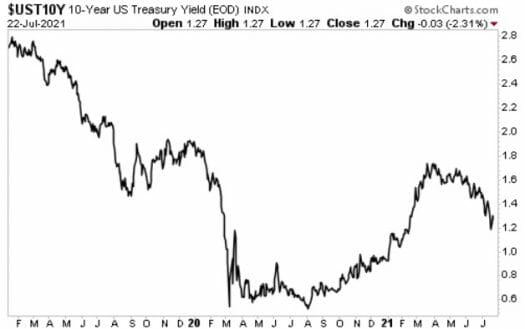 Since yields fall as investors buy bonds, it suggests that there may be concerns about the rapid recovery slowing down.

Despite these seemingly conflicting signs, the prevailing sentiment in the stock market seems to be bullish for now.

Consider the number of initial public offerings (IPOs) happening. There are so many it’s frankly getting tough to keep track of them. I counted six just the other day, and according to Barron’s, there were about 20 in total last week.

Now, longtime readers know that we’ve advised against jumping into IPOs right away. As my colleague Jimmy Butts wrote in this piece, it’s usually best to wait a few months. That said, I want to tell you about two recent IPOs in particular that I’m going to keep an eye on…

I’ve Got My Eye On These 2 IPOs

One IPO I’m keeping an eye on is Zevia (Nasdaq: ZVIA), a Los Angeles-based maker of sodas and energy drinks. The company’s products are sweetened with stevia, providing a natural plant-based alternative to sugary drinks.

The company posted sales of $110 million in 2020, a year-over-year increase of 29%. It also boasts gross margins of 43%-45% according to its pre-IPO prospectus. What’s more, 13% of sales come from e-commerce, likely reflecting an increasing interest from millennial buyers who avoided grocery stores during the pandemic.

While the company reported a $6 million loss in 2020, it says the first quarter of this year has been profitable.

You can start to see the investment case building here, if you think about it…

I’ve been an avid consumer of the company’s products for a couple of years now. We don’t buy any drinks with sugar in our house, yet every alternative we’ve tried (whether from Coca-Cola or elsewhere) hasn’t seemed to be able to get the magic formula right.

Zevia is onto something. And considering the fact that the nation’s largest demographic (millennials) is now entering its prime purchasing age, the big soda makers know that they need to adapt to changing taste trends, fast.

I’m not sure whether Zevia can turn into the next Monster Beverage (Nasdaq: MNST). In that case, MNST was an upstart maker of energy drinks that went on to dominate its market and become one of the greatest investments of the past 20 years. But what I do know is that sugar is “out,” and plant-based alternatives are “in.” Eventually, either Coca-Cola or PepsiCo could come knocking and scoop this one up for a rich premium. Stay tuned.

This is a chain of fitness studios that got their start in Australia and has grown to 1,555 studios and 2,801 franchises across 63 countries. The company is now headquartered in Austin, TX, and boasts Hollywood actor Mark Wahlberg as an early investor, franchise owner and current board member.

The company’s studios focus on providing intense functional fitness training classes that last 45 minutes. They can also be “scaled” to a person’s ability and fitness level. F45 also post workouts and classes online, which has helped with customer retention and growing the brand during the pandemic.

CEO Adam Gilchrist says more than 90% of its studios have reopened after being shut down, and that attendance is outpacing the rate before closures.

I’ve been seeing these studios pop up all over town. And I know the brand has garnered a community of hard-core fans. But, like with Zevia, I’m waiting to pull the trigger on this one. One reason is because, as Yahoo Finance points out, F45 is still unprofitable.

The company had a net loss of $37 million on revenue of $18 million for the first three months of 2021, compared with a loss of $733,000 on $25 million in revenue during the same period last year, according to filings.

My take: Watch this one as the excitement around the IPO begins to cool down. Look for the company to get a few quarters under its belt. If it looks like the rapid growth of the brand is back on the right track and there is a path to profitability, then consider taking a small position.

Editor’s Note: As we’ve mentioned, it pays to wait after a company goes public. That’s true for either of these IPOs or for any others you see debut on the market. But that doesn’t mean you can’t find a “home run” right now…

In fact, Jimmy and his team over at Top Stock Advisor have already hit it out of the park with several of the picks released in his “predictions” report earlier this year. And now, he’s releasing a “bonus” prediction that you won’t want to miss…

Go here to get the details now.