The Cashless Trend Is Accelerating… Here’s How To Profit…

I may be dating myself a bit here, but my first paycheck came from a summer internship at Bank One (now a part of JP Morgan Chase). My primary responsibility was to teach customers how to deposit checks into their accounts using the ATM machine.

These days, you can do the same thing with your cellphone. But even that function (depositing checks) is also slowly becoming obsolete. Our kids or grandkids may one day hear you refer to a checkbook and have absolutely no idea what you’re talking about.

If you’re like most, then you probably see fewer (or zero) cash withdrawals on your typical monthly bank statement. Most daily purchases like gas and groceries are rung up on the old debit card. And if you owe the neighbor kid $50 for mowing your lawn, well, he probably accepts Venmo or some other electronic cash transfer platform.

It wasn’t that long ago that some retail stores used to be cash only. Now, you find places where paper currency is no longer even viewed as legal tender. I just went to a baseball game with enough money for a cold beer and a hot dog, only to find that the concession stands didn’t accept cash whatsoever. Plastic only. Same thing at my local cinema. Supposedly, these are lingering Covid precautions that will eventually be lifted. But even before the pandemic, there was already an inexorable shift away from greenbacks.

The coin of the realm isn’t a coin at all anymore, but rather a few clicks on the phone. Restaurant tabs and Uber fares are paid over the internet. Businesses can instantly settle invoices using ACH transfers. Heck, you can’t even drop a quarter into street parking meters anymore — they’ve been replaced with pay-by-app technology.

Thankfully, I don’t think Ben Franklin and his pals are going away entirely — at least not anytime soon. After all, who wants to walk away from a poker table with a numeric code instead of a stack of bills? But there’s no denying that digitization of payments is becoming increasingly common.

Whenever there is a paradigm shift, profits inevitably follow. And this one is about as big as they get. In the United States alone, consumers spend about $13 trillion annually on goods and services. More than half of those sales ($7.3 trillion) are paid for using debit, credit, and pre-paid cards, not counting electronic transfers for rent, utilities, and other such payments.

Cash still accounts for nearly one in three transactions nationally, but most tend to be small purchases of $10 or less. For larger outlays — and most e-commerce activity — plastic is the dominant means of payment. And with the fees charged to access their networks, the credit card oligopoly almost prints money for its shareholders.

Visa (NYSE: V) processes 65,000 transactions per second worldwide and handles $9 trillion in annual spending volume. And each swipe contributes to the bottom line. Thanks in part to robust cash flows and lofty returns on invested capital (RoIC), the stock has posted annual returns of 29% over the past decade — for a cumulative gain of more than 1,200%. 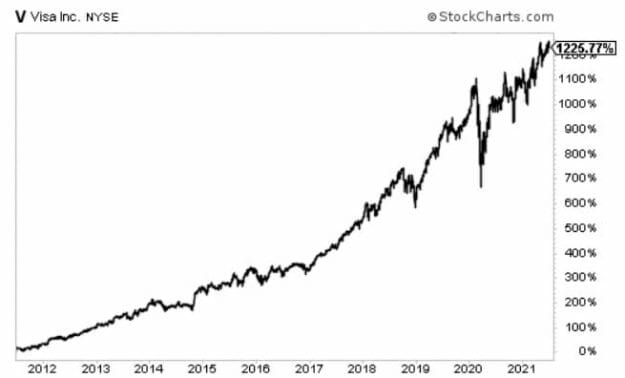 With universal acceptance around the world, Visa’s economic moat is practically unbreachable. In its estimation, data analytics firm Kantar believes the Visa brand is worth $190 billion. That ranks No. 8 globally, just above McDonald’s and below Facebook. Rival Mastercard (NYSE: MC) also grades in the top ten.

Get Ready To Invest In The Fintech Revolution

Let’s just say there are worse places to invest.

But as I just recently told readers over at my Takeover Trader premium service, I’m more interested in disruptive financial technology (Fintech) innovators that have upended the existing electronic payments infrastructure.

This is a major trend that’s already well under way. In fact, some of the early players are already big names in their own right. But make no mistake, there are still big-time profits ahead for investors…

That’s because this is a space where innovation is happening almost daily. Some are more significant than others, but we’ve barely scratched the surface of what’s to come.

Later this week, I plan to cover some of the early players in the Fintech revolution. As I said, some of them are already major names in their own right. Others were acquired by rivals for a rich premium.

They certainly won’t be the last to achieve either of those.

As I said about Visa, there are certainly worse places to invest. And that’s why this will be a key area of focus for us over at Takeover Trader in the coming months.

P.S. I also just released a brand-new research report about the one “mega-merger” that could dwarf them all…

There’s one thing we know for sure… Sometimes all it takes is the slightest whiff of a rumor to send a stock soaring.

We’ve already closed out on multiple triple-digit winners over at Takeover Trader, but that could be nothing compared to what we’re about to see in this new wave of “megadeals.”

Go here to get all the details right now.