Recently, I told our readers that I think we are entering the beginning stages of a commodity boom.

I also pointed out that investors would be well-served to look beyond the usual suspects, such as gold. In fact, I cited several examples of commodities — and companies involved with producing them — already shooting higher in just a short amount of time.

But fear not, we’re at the early stages of this cycle. In fact, the evidence is mounting that it could be a “super-cycle.”

After setting the table in my previous piece, there just simply wasn’t enough space to cover what I think is the real catalyst behind the boom, aside from the usual suspects. Not to mention which commodities I am bullish on, so let’s get into that today.

The Case For A Super-Cycle

Commodity cycles tend to be long-lived. That’s because the rich, low-hanging mineral fruit has already been plucked, forcing miners to settle for smaller deposits or lower-grade ores. Couple that with the fact that producers cut back on their exploration budgets during the lean years, and there just aren’t many large-scale new projects under development. We won’t even get into the fact that it takes years to secure the requisite permits for a new discovery to become operational.

Sure, higher prices incentivize spending to expand production. But this isn’t a spigot that can just be turned on and off overnight. That’s why analysts at Goldman Sachs have made a strong argument that we are in the initial stages of a commodity “super-cycle.”

We could be headed for a period of rising demand and persistent supply shortfalls for grains, metals, chemicals, and energy that keep prices at elevated levels for the next 10 years.

For the record, it has happened before. We saw a similar super-cycle starting around 2000 that didn’t peak and wind down until 2011.

Just look at what’s already transpired. As you can see, the benchmark Goldman Sachs Commodity Index (GSCI), which tracks two dozen commodities from natural gas to coffee to zinc, has already surged about 40% since last April. 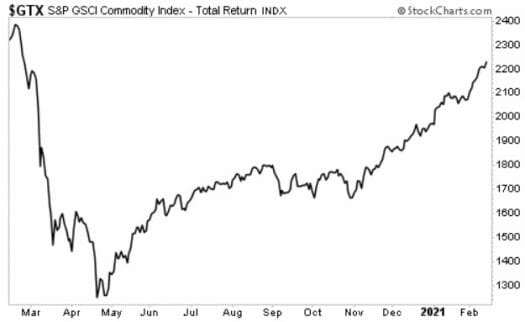 The last boom was triggered by robust spending by China and other emerging markets. This second round will be fueled by the “green wave.”

If this cycle proves to be even half as powerful as the last, then the companies behind these key commodities (and more) will shower stockholders with cash.

I’ve Got My Eye On These Key Commodities

According to the World Bank, the global shift towards green energy and electric vehicles could increase the consumption of six key minerals by 900% (10-fold) by 2050.

Yet, there is a fixed (and depleting) supply.

This “green” tidal wave will accelerate the consumption of six principal materials: cobalt, copper, lithium, manganese, nickel, and zinc. We won’t get into all six, plus there are other commodities that are worth a look as well. So this will be just a taste. But here’s where things stand with four key minerals…

Lithium is perhaps the most well-known to investors. It has more uses than duct tape. You’ll find it in fireworks, airplanes, glass cookware, and medicine cabinets. But those are just niche applications. The true utility comes from the fact that lithium is the lightest of all metals and has twice the energy storage density of previous materials.

That’s an ideal combination, which is why lithium is coveted by battery makers. Lithium compounds are found in phones, power tools, tablets, golf carts, portable video games… anything that needs to be periodically recharged. 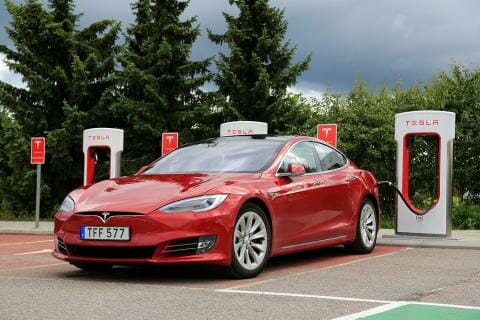 The average cell phone contains just one-tenth of an ounce of lithium; the average laptop computer needs one ounce. By contrast, a plug-in hybrid vehicle needs 20 pounds of lithium materials. That’s 320 times more than a laptop and 3,200 times more than a phone. So a single electric vehicle battery needs more lithium than a few thousand phone batteries combined.

Tesla and other automakers are investing billions in massive lithium battery manufacturing plants. And supplies aren’t exactly abundant. Nearly 90% of the world’s lithium deposits are concentrated in the briny lithium salt flats of Chile’s Atacama desert.

Cobalt will ride the same tailwinds. The dense blue metal is used as a stabilizing agent to prevent corrosion and fires in battery cathodes. Considering it can account for nearly one-quarter of the raw material in a battery, the ongoing electrification of commercial fleets and increased production of hybrid models spells huge demand.

And automakers aren’t the only buyers. Under President Biden, we’ll likely see a renewed push towards wind and solar power installations. But these renewable power sources are intermittent; they can’t generate power when night falls or the wind dies down. There’s an acute need to store that electricity until it’s needed by homes and businesses.

What better place than a bank of large-scale batteries? The development of green power grid storage is another source of demand. And meeting that demand will be a challenge, considering 60% of the global supply of this rare material is locked up in the Democratic Republic of Congo — a less-than-hospitable mining jurisdiction. 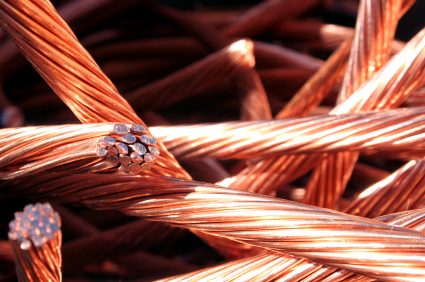 Just about every green energy project requires copper. After centuries of looking, we still haven’t found an affordable, ductile material that is a better conductor of heat and electricity — with antimicrobial properties to boot.

There are countless old-school uses — from residential plumbing pipes to telecom lines. But the green wave is taking demand to a whole new level. Believe it or not, the average electric vehicle is installed with four miles of copper wiring. China’s BYD uses over 30 million pounds of copper per year — and that’s just one manufacturer.

Globally, we use about 24 million metric tons.

Miners and refineries can’t keep up. Output is expected to slide for the second straight year in 2021, leaving a deficit of 52,000 tons. That imbalance has been felt in the trading pits. After bottoming at $4,300 per ton last March during the Covid lockdowns, copper has roared back to $8,000 per ton.

And the greener we get, the more copper we’ll need. Chinese imports swallow over 50% of the world’s supply, and global usage is expected to increase by 8 million tons per year over the next decade. Consumption will likely outpace production. So the current deficit will probably widen, driving prices even higher. Goldman Sachs is forecasting copper prices to reach $9,500 per ton within the next year and $10,000 by 2022.

Moisture and oxygen are natural enemies of steel. That’s where zinc comes in. The world’s fourth most widely-used metal, zinc is used as a coating on iron and steel to help prevent rust and corrosion. It’s estimated that rusty, corroded equipment and structures cost $7 billion annually for maintenance and replacement.

Galvanized coatings are widely used in marine equipment, but the two biggest end markets are automotive and construction. You can’t build infrastructure without steel beams, and new vehicles must be protected from the elements.

Zinc is most commonly produced as a by-product and typically found alongside other mineral deposits like lead. Many unprofitable mines in China, South Africa, and elsewhere have been shuttered in recent years and can’t be brought back online quickly. So like copper, supply constraints could set the stage for a deficit of up to 650,000 tons this year.

For context, that’s three times the amount of zinc currently stockpiled at the London Metals Exchange. As it stands, prices have already climbed from a March low of $1,675 per ton to the current $2,800.

Again, this is just a taste of what’s to come. I’ll have more to share on this in the weeks ahead. But the bottom line is that investors need to prepare to profit now — because the super-cycle is already underway.

In the meantime, if you want to know what the biggest themes of 2021 (and beyond) are going to be, then you need to check out our latest report…

You’ll discover the shocking reason we believe violence in Peru could push one $2 stock north of $40… how a revolutionary breakthrough in air travel could make early investors rich… and the “odd” reason one small group of mining stocks could soar in the coming months (they’ve done it before — more than once).