[ad#goog_300x250]Technology stocks have always had trouble with the gap between promise and performance. One of my first gigs as a financial writer came about from this very problem.

I had just sold out of a sizable and involved entrepreneurial project, and was casting about for something to do when I was approached to do a bit of forensic research for a major newsletter group.

Seems their editors were writing up tech stocks like crazy, but none of them had ever actually run a business, and to be frank, a lot of those guys couldn’t tell the difference between an ongoing concern and Red Bull vaporware sketched on the back of a burger-joint napkin.

My job was to see if there was any real grownup biz going on — you know, products, customers, sales, maybe even occasional profits! More often than not, it was just some pimple-faced college kids with a PC and a foosball table.

These days, the big promise is slates and cloud computing, which is all somehow completely different from last year’s big noise about notebooks and net-based computing… or not.

According to the geeks at Gartner (NYSE: IT), worldwide spending on IT is supposed to skyrocket in the second half of 2011. We’re talking growth of 7.1% net for the year, with computer hardware and enterprise software slated to lead the charge with 11.7% and 9.5% growth, respectively.

Better yet, cloud computing is supposed to advance at four times the rate of regular terrestrial computing.

Now I must confess that I’ve frequently been accused of “not getting” tech stuff. But when I dug deeper into Gartner’s numbers, I couldn’t help but notice that all that wonderful cloud stuff is only supposed to account for some 2% of total sales in 2011.

Now when you don’t get something, you turn to an expert, right?

The problem is it’s damned hard to understand most IT experts, who seem to speak some otherworldly language that consists entirely of acronyms.

That’s why I just love technical analysis. At its very core, it allows you to poll a million experts on a given subject. Better yet, it completely discounts their crank talk and bloviating, focusing instead on where these guys are putting down green dollars.

And the Facts on the Ground

Check out the chart below of Standard & Poors’ Technology Sector ETF (NYSE: XLK). It doesn’t give a hoot about all that talk about clouds, slates etc…

Instead, it shows a clear set of stacked sell signals, including a double top at the top of trend, a broken 200-day moving average, and a reversal in the Money Flow oscillator.

Quite frankly, it’s that first drop that interests me the most right now, as it is so probable — what with five or more scenarios running to it or through it — and sizable enough to outweigh upside risk. And with the right leverage, it could generate substantial gains.

I have on my desk an early report out of Goldman Sachs (NYSE: GS) on Verizon (NYSE: VZ)’s second quarter sales of smartphones.

Let’s not worry so much about how I got it, okay? Instead, let’s focus on the rather intriguing disparity between sales of Droids (which are beating expectations) and Apple (NASDAQGS: AAPL)’s iPhones (which are slated to disappoint at just a tad below the 2.2 million mark).

This falloff intrigues because unlike the cloud and all that crap, iPhones now represent some half of Apple’s revenue these days. Seriously, this line of gadgets is pretty much the difference between Apple as a small boutique seller of pretty PCs and Apple as the tech behemoth.

If the market for iThis, iThat, and iThe-Other-Thing is finally showing signs of saturation, then Apple could be in line for quite a tumble.

And then there’s that whole “Steve Jobs is dying of cancer” thing. But we don’t even need that sort of super-dramatic issue to make some coin from a moderate drop. 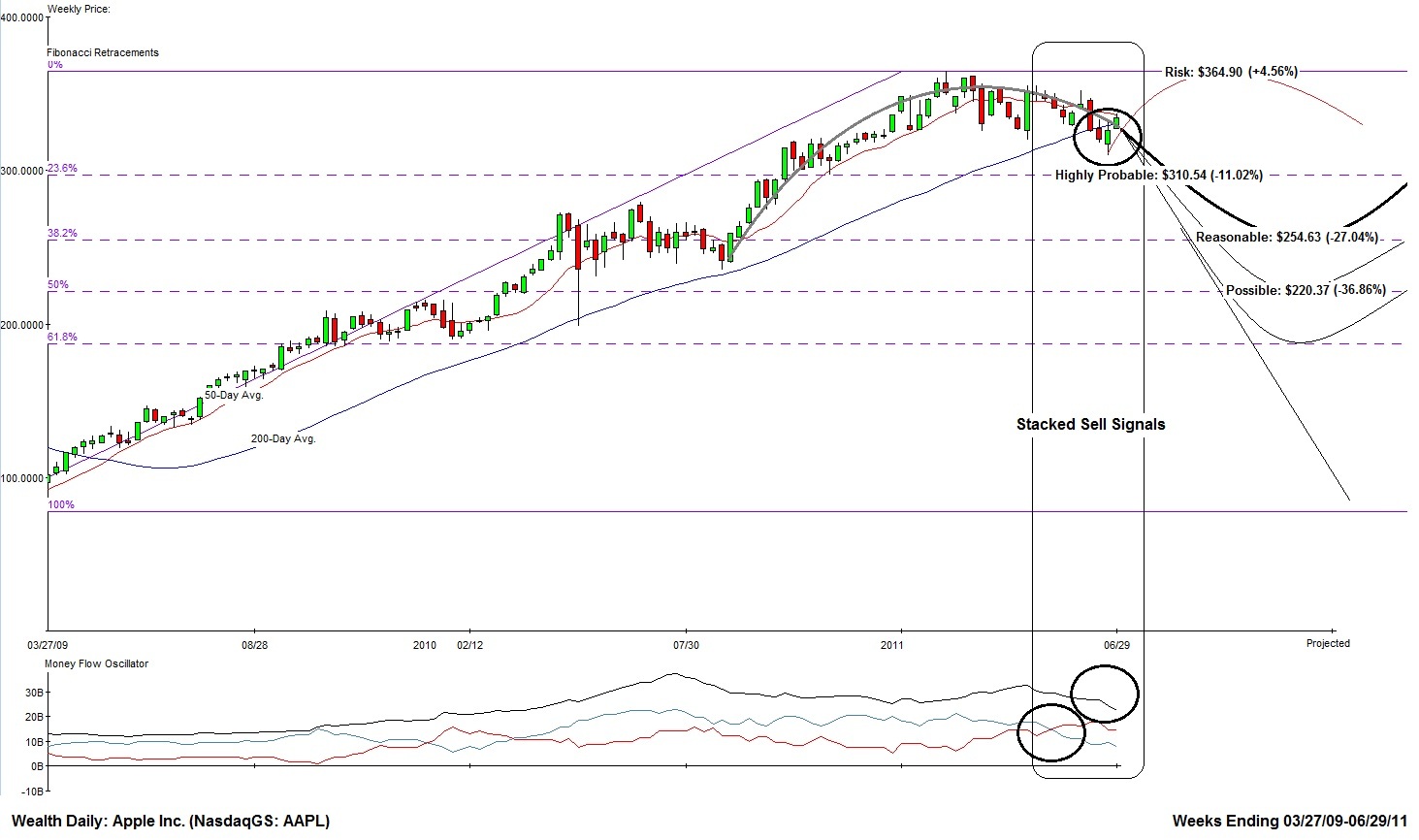 Looking to the AAPL chart, we see a similar set of stacked sell signals — including a rounding top, a breach of the 200-day average, and a money flow reversal.

Our “Highly Probable” downside target is sufficient to move these puts to $22.35 for gains in excess of 119%.

I should mention one brief caveat: One of my very first investigations for that other newsletter company was of a rapidly growing online commerce outfit.

When I dug into the situation, I discovered they were being investigated by a state district attorney for funneling automatic weapons to street thugs. Needless to say, I recommended shorting the bejeezus out of them!

The name of this sorry little outfit was eBay (NASDAQ: EBAY). CEO Meg Whitman basically told the prosecutor she was sorry and wouldn’t do it again. And shares went on to double — about ten times over!

So yeah, sometimes I really just don’t get tech stocks. (But this time, I think I really do.)