Not gonna happen. That was my initial reaction when my wife informed me last month that I had to take a medical exam for our health insurance. To be blunt, I’m not a big fan of doctors. It’s nothing personal, I just don’t like being poked and prodded.

In all seriousness, I do understand that preventive screens and wellness checkups can save lives. So reluctantly I made an appointment and am happy to report that my lab work came back clean (maybe they’ll leave me alone for a while now).

But the fact is, just about everyone needs medical care from time to time. And none of us is getting any younger. Did you know that 10,000 baby boomers celebrate their 65th birthday each day? That’s 10,000 today, another 10,000 tomorrow, and so on — until the year 2030. I’ve recited this figure multiple times as it pertains to social security, but it has equally large ramifications for healthcare.

The senior citizen population is set to explode, with the 80+ crowd projected to double in size over the next 20 years — it’s a demographic certainty. We can be equally certain that this group will collectively account for hundreds of billions in annual healthcare spending. And that, of course, can be good news for investors.

Healthcare spending accounts for nearly one-fifth of U.S. GDP. According to the Centers for Medicare and Medicaid, per-capita spending rose 4.6% in 2017 to $10,824 per person on average, or $3.5 trillion total. That’s triple what was spent just three decades ago. 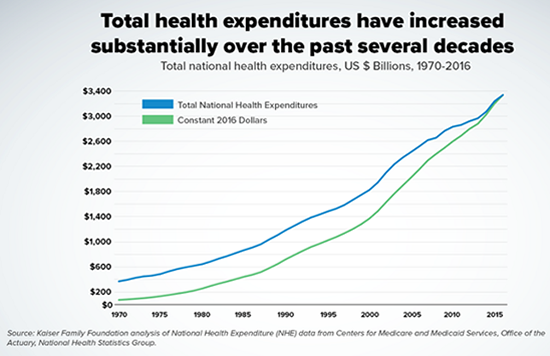 Even by government standards, $3.5 trillion is an astronomical sum — and it’s not going to shrink anytime soon. In fact, it is forecast to expand to $5.7 trillion by 2026. That means in less than a decade, we’ll be spending $2 trillion more per year than we already do currently.

That’s a depressing thought for anyone paying for private health insurance. But from an investment standpoint, I can’t think of another industry with such a long growth runway.

It’s easy to get bogged down in the facts and figures. This is a deeply complex industry. Heck, the Affordable Care Act is said to be over twenty thousand pages long. So frankly, I see little benefit in quoting reams of statistics to you — unless you need a cure for insomnia.

The point is, trillions of dollars are being thrown at this industry each year, and that total is headed nowhere but up. For investors, opportunities abound, from tiny biotech drug developers to surgical device and lab instrument makers to the insurers cashing all those monthly premium checks.

Of course, there are some question marks too, such as Medicare reimbursement rates and potential regulatory upheaval. New legislation to lower prescription drug prices, for instance, probably wouldn’t do any favors for a company like Pfizer (NYSE: PFE).

The Best Way To Invest In The Healthcare Boom

That’s why I want to bring your focus to one subsector. Companies in this niche benefit from the tailwinds we’ve been discussing, but don’t have to deal with the thornier issues. That’s because they are, first and foremost, property owners.

I own a wide variety of REITs in the portfolio of my premium newsletter, High-Yield Investing … hotels, apartments, shopping centers, industrial warehouses. Healthcare REITS operate in much the same way, except they own outpatient clinics, medical office buildings, senior living communities and other such facilities.

These types of properties aren’t nearly as sensitive to consumer and business spending as other groups. After all, even in recession, people still get sick and require medical treatment. So occupancy rates are relatively stable, with far less tenant turnover than retail and other property groups.

Generally speaking, most of these specialized healthcare facilities are signed under long-term 12-15 year leases, often with built-in annual rate hikes. Like any other real estate, rental rates are dictated by the laws of supply and demand. Given the powerful demographic trends we’ve been discussing, the latter is all but guaranteed — healthcare providers won’t have many open appointments or empty beds.

Average life expectancy continues to climb thanks to radical advances in healthcare, including new screening tools and treatment options. Over the past century, the number of U.S. citizens aged 75 to 84 has increased by 1,300%. And we’ve seen an even sharper 4,700% surge in the number of 85 year-olds.

Keep in mind, the elderly account for a disproportionate share of overall healthcare expenditures. According to the Department of Health and Human Services, people aged 65 and over represent 15% of the population but 34% of all spending. On average, a 74-year-old racks up $16,000 in annual healthcare bills, versus just $2,000 for a toddler.

Octogenarians are also far more likely to need some type of institutional care such as independent or assisted living or skilled nursing. In fact, those 85 and over (a fast-growing pool) are five times as likely to be admitted as people between the ages of 75 and 84.

What does all this mean? Well, for starters, these trends support a rock-solid dividend stream for the companies that own and lease these properties.

There are a number of choices for investors in this sector that will likely provide great returns. That’s not to say I expect to see triple-digit gains over the next year or two. But the same traits that have benefited shareholders in the past are still in place today.

That’s why this is just one of the many sectors I’m watching for potential additions to my High-Yield Investing portfolio.

If you’d like to find some of the best (and safest) yields the market has to offer, go here now.