This Shipping Firm Is CRITICAL To Amazon’s Success

But perhaps the most transformative was in 1994 when an enterprising Princeton graduate created a platform for avid readers to purchase books via the internet and have them shipped directly to their front door. Originally called Cadabra, the website soon branched out into music, movies, and various other products.

As they say, the rest is history.

Of course, I’m talking about Amazon (Nasdaq: AMZN), the brainchild of Jeff Bezos. Today, the amount of customer traffic and sales volume on Amazon’s insanely popular website is almost unfathomable. Even on a “slow” day, the company hauls in over $700 million in revenue. Over the holidays, it takes in close to $1 billion every 24 hours.

That’s a lot of books. A lot of clothes, electronic devices, and sporting goods. A lot of everything. The number of individual products is almost too many to count. Amazon simply reports that customers ordered “billions” of items last quarter. The company had to hire 200,000 seasonal workers last year to help pack boxes and make deliveries.

That’s equivalent to the population of Salt Lake City.

Morningstar calls it “the most disruptive force to emerge in retail in several decades.” It’s hard to argue with that assessment of Amazon’s business model, which has forever changed the way millions of Americans shop. Just ask Toys ‘R’ Us, Sears, and so many other victims that fell by the wayside and were forced into bankruptcy.

I won’t bore you with a bunch of facts and figures. We all know that most people have migrated online for at least some of their shopping — and they are making more frequent transactions. It wasn’t that long ago (2006) when annual e-commerce sales in the U.S. first topped $100 billion. The $500 billion mark wasn’t too far behind.

According to the U.S. Commerce Department, Americans spent $602 billion on internet purchases last year. That’s an increase of more than 30% from 2017 levels.

And penetration rates are climbing inexorably higher. Digital commerce accounted for 6.4% of total retail sales in 2010. That rate hit 10.7% in 2015, 13.2% in 2017, and currently stands at 16% today. That means of the $3.7 trillion in total annual retail sales across the country, one out of every six dollars passes through a virtual cash register. 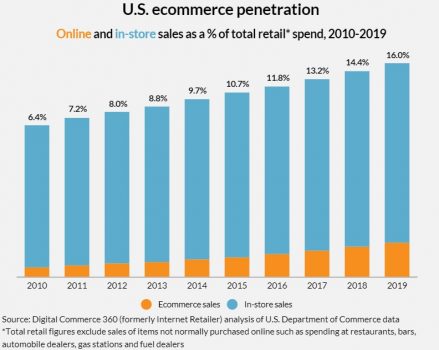 While spending at brick-and-mortar outlets inched up just 2% last year, e-commerce activity climbed at a brisk double-digit pace for the 10th straight year. Most analysts agree that it’s only a matter of time before internet retail surpasses the $1 trillion mark in annual sales.

Of course, Amazon isn’t solely responsible for that. There are other virtual storefronts where consumers like to browse. Amazon faces formidable e-commerce adversaries such as eBay. Traditional retail chains such as Wal-Mart and Target have a massive omnichannel presence as well.

Still, Amazon is clearly leading the charge. If you count third-party sellers, the total dollar value of transactions on the Amazon.com site jumped 25% last year to $222 billion. That accounts for more than one-third of all online spending. And this industry is still growing by leaps and bounds.

Except the leaps aren’t measured by the millions — or even the billions — but the hundreds of billions.

The Big Business Of Getting Stuff To Where It’s Going

Which brings me to one of the picks identified by my Project Rainmaker system. As I’ll explain in a moment, this firm is in a perfect position to help solve a lot of Amazon’s most pressing issues…

You see, all those products purchased online don’t just magically appear at our doorsteps. Most spend some time in a warehouse before they are delivered. And given the boom in online shopping, demand for this space is fierce.

Keep in mind, the global ranks of Amazon Prime members have exploded to 150 million… and counting. Some join for music or video streaming, but most sign up for Amazon’s speedy overnight or two-day delivery. Quick shipping has been great for sales, but it exerts even more strain on warehouse logistics.

As you can see from the chart below, Amazon’s warehouse needs have been expanding at a 35% annual growth rate — doubling every two years on average. The company’s storage space pushed through the 100-million-square-foot mark several years ago and continues to grow.

Needless to say, this chart doesn’t reflect the current state of affairs. With most Americans staying at home to prevent the spread of Covid-19, millions are logging into Amazon and pushing the “Add to Cart” button at a frenetic pace.

The company was reportedly so swamped during March that some orders are taking up to a month to deliver. This surge eased in time. But even before the lockdown, Amazon’s order fulfillment needs were already growing increasingly complex.

It isn’t any surprise, then, that Amazon is morphing away from a purely online retailer into more of a hybrid organization. Instead of outsourcing everything, Bezos has built an in-house shipping/logistics arm. A highly publicized feud with former partner FedEx has only hastened this transformation.

Amazon has been cutting ties, no longer using FedEx for ground shipping. That ban even applies to independent third-party vendors. To pick up the slack, Amazon has assembled a massive fleet of delivery vans, drones, and even dozens of cargo jets.

But it’s barely enough to meet current demand – to say nothing of the next five to 10 years as e-commerce continues to ramp up.

We added this pick to our portfolio back in May. And since then, it’s rallied by 27% – all in less than four months. Unfortunately, I can’t share the name with you today. But I expect more gains in the months to come.

But that’s not all… Thanks to our regular use of options in the Rainmaker system, we’ve routinely magnified our gains. In this case, I recommended call options on the stock that rallied by 88% in just a month.

Most of my followers wouldn’t be aware of this company’s existence. But that’s the power of Project Rainmaker. And it’s something I want every investor to be able to put into their hands. That’s why I just released a special presentation on Project Rainmaker, explaining what it is and how you can put it to work immediately.

To check out the video, go to this page right now.