Last Time I Saw This, I DOUBLED My Money

It has to be one of my all-time favorite businesses.

I first ran across a company called Aircastle in the fall of 2014. Almost nobody had heard of the tiny company. It had some institutional support, but was virtually invisible to mainstream retail investors. It certainly wasn’t a stock like Tesla or Apple, with legions of adoring fans and saturated media coverage.

But I’m always on the hunt for diamonds in the rough. So I did a little digging – and liked what I saw. Bear with me here (this will all come back into play later).

A Diamond In The Rough

Aircastle was in the airline business. But it didn’t do any actual flying. Instead, it simply rented out planes to other carriers. A landlord in the skies. At the time, the company had a fleet of 148 commercial jets that were leased to more than five dozen customers such as Alaska Airlines, American Airlines, and Thai Airways.

Management took a countercyclical approach to fleet management, buying aircraft at depressed prices during industry slumps and then selling them for a handsome profit when demand returned and prices rebounded — collecting steady rental income in between.

Most of the proceeds were recycled into newer planes (the weighted average age of the fleet had dropped from 11 years to 8), which commanded higher rental rates. And judging by the near-perfect utilization rates between 99% and 100%, there were plenty of eager customers that preferred leasing over buying.

On the financial side, management shrewdly took advantage of historically low interest rates and refinanced its debt, swapping out an expensive 9.75% coupon loan for a more affordable 5.125% note. Few investors pay attention to such things. But the cost of capital is important, and these moves shaved over $20 million in annual interest expenses.

Compared to the $5.7 billion book value of the fleet, Aircastle’s borrowings cost just 3.4% annually. Meanwhile, the leasing operations were generating a lofty rental yield of 13.1%. Subtract that out, and you get a net interest margin of 9.7%.

Banks don’t earn that. Neither do most property owners. Yet, for every dollar invested in jets, Aircastle was collecting a dime in pure profit each year. If you’re in such a position, what’s the most logical course of action? Naturally, you put more cash to work and keep expanding the size of your fleet.

When The Numbers Sing, I Take Notice

Aircastle deployed nearly a billion ($916 million) in fresh capital over the prior six months, adding another 11 planes. And shareholders were reaping the rewards. The company had doubled its dividend distributions in less than three years.

In short, Aircastle was pushing all the right buttons to optimize efficiency, maximize cash flow, and return capital to investors. But what about valuation? Well, including debt, Aircastle had an Enterprise Value of $5.1 billion, a $600 million discount to the fleet’s book value of $5.7 billion.

In other words, the company could be bought for less than the liquidation value of its assets, let alone future earnings potential. Needless to say, I took a position — and enjoyed a 30% gain over the next three months.

But I didn’t cash out. At least not until November 2019, when something special happened… Action in a “hidden” corner of the market sent the stock soaring by more than 40% — practically overnight. And when it was all over, I walked away with a nice triple-digit return. 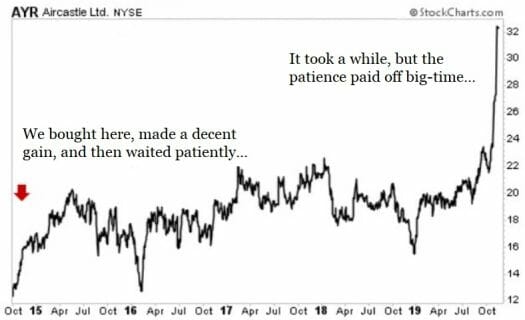 Why This Matters To You

I bring all this up for two reasons. First, it provides some insight into what I look for in a prospective portfolio candidate.

But more importantly, I recently found a company in practically the same business with similar potential.

You won’t hear about it on CNBC. It’s not a favorite of young millennial traders on Robinhood. And you certainly won’t hear the President mention it on Twitter.

But if history is any guide, we could be on the path to a triple-digit payday with this stock. All we have to do is buy it, and wait for this “hidden” market to take care of the rest.

If you want more details on exactly what’s going on here, then you should tune in on Tuesday, August 18th. I’m releasing an expose briefing on the project I’ve been working on for months that reveals how to find stocks like Aircastle — before they soar, thanks to this hidden market.

To get more details and secure your spot for the presentation, go here now.