These Mountains May Be More Profitable Than Gold Mines

I’ve been having some trouble getting the kids to a little housework. And by a little, I mean anything at all.

They’ve been out of school since March with little to do except play video games and raid the refrigerator. I asked for somebody to take out the trash yesterday, and the day before. Yet, there it sits, piling up in the corner of the kitchen.

I never used to give much thought to where all this waste went. That is, until I moved into a rural area with no municipal trash removal service. Instead of having it picked up weekly on the curb, now we have to load the bins ourselves and drive them to the nearest county dump.

Let’s just say it’s not exactly a pleasant experience. But what happens after that is where it starts to get interesting…

From there, trucks come by on a regular basis to empty these large containers, transporting their overflowing contents to a regional landfill somewhere. Thankfully, it’s nowhere near my neighborhood. Everyone acknowledges the importance of landfills, but nobody wants to live downwind of one.

It’s a classic case of NIMBY (not in my backyard).

Given the public backlash at zoning hearings and stacks of permits that must be obtained, it’s nearly impossible to build new landfills in many states. That makes the existing ones as good as gold.

In fact, these mountains of discarded trash can literally be more profitable than gold mines.

The Staggering Numbers Behind Our Trash…

After all, most of the municipal solid waste (MSW) generated within a given radius eventually makes its way to one of these sites. But before anyone can dump their trash, they must first make a cash payment to the owner — known as a “tipping fee”.

And waste volumes aren’t getting any lower. Populations continue to rise; and more people mean more trash. It’s as simple as that. Back in 1960, the country generated 88 million tons of municipal waste. Today, we produce about 270 million tons annually – about 4.5 pounds per person per day. 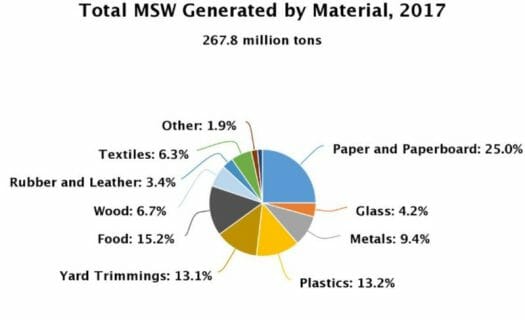 That includes kitchen leftovers of course, along with yard trimmings, newspaper, plastic containers, broken furniture, and who knows what else. In case you’re curious, the Environmental Protection Agency (EPA) breaks down the tonnage totals by category on its website.

About one-third of the nation’s trash is either recycled or composted, amounting to some 94 million tons annually. Dedicated efforts have quadrupled the amount of glass, batteries, aluminum cans, cardboard boxes, and other products tossed in recycling bins since 1980.

Of the rest, about 140 million tons are sent to landfills each year. Imagine 766 million pounds of trash. That’s what is being deposited per day.

And a few well-positioned companies are turning all that trash into a steady stream of income.

Take Waste Management (NYSE: WM), which owns 244 active solid waste landfills around the U.S. and Canada. With a fleet of 9,000 vehicles serving more than 20 million customers, the company never runs out of trash to pick up, which means a steady stream of recurring revenue.

The company generated nearly $4 billion in operating cash flows last year – one-quarter of which was returned to stockholders. Combined with the appreciating share price, WM has delivered healthy double-digit total returns over the trailing 3, 5, 10, and 15-year periods. 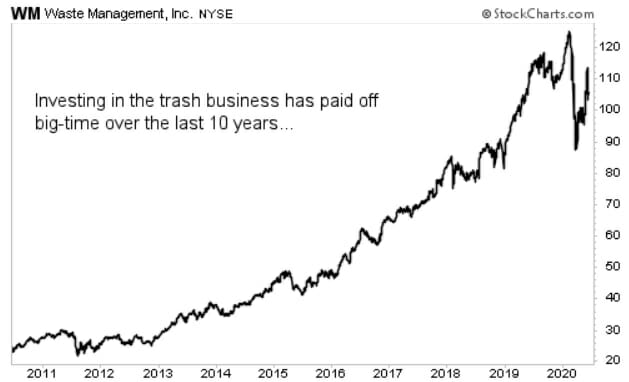 Nothing wrong with that. In fact, you could stop right there and look into WM further on your own.

But I’m looking at a different corner of this attractive niche.

How We’re Going To Profit

Eagle-eyed readers might notice that the numbers I mentioned above don’t match up. Of the 267 million tons of municipal waste, 140 million goes to landfills and 94 million is either composted or recycled.

What about the remaining 33 million tons?

Answer that, and you’re on the right track to my latest portfolio recommendation over at High-Yield Investing.

It’s one of the nation’s top providers of waste-to-energy (WtE) services. As the term implies, the company turns unwanted trash into clean, reliable power. That process happens by incineration, which produces steam and leaves behind nothing but inert ash.

Like solar and wind power, solid waste is deemed to be a clean, renewable fuel source. (The company also has other assets in its portfolio, including dozens of waste transfer stations, material processing facilities, and landfills.)

This is a beautiful business model. Other power generators must pay for their raw materials (coal, natural gas, etc.). But in this case, the fuel is free. Better than that — the company is paid to take it. It also provides waste disposal services to both commercial businesses and public sector entities, typically under long-term contracts.

I don’t envision a future without waste, which means the company’s services will always be in demand.

If you’d like to get the name and ticker symbol of this pick, you can learn more about High-Yield Investing right here.