It’s Time To Start Looking At Gold. Here’s Why…

And just like that, more than $7 trillion in global equity market value has disappeared.

To call this recent selloff epic is a bit of an understatement. Historic is more fitting. Last week, in just five days, the Dow Jones retreated by more than 3,500 points. In percentage terms, that’s a steep decline of 12%, which officially meets the technical definition of a correction. The selloff has only intensified further since then. In fact, we are now officially in “bear market” territory. 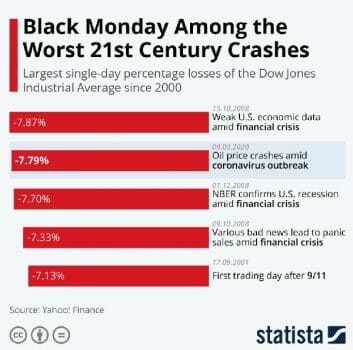 Generally, it takes weeks or even months for a market correction to unfold — not to mention a bear market. This one struck suddenly and without warning, the fastest in recorded history. It was just as brutal for the tech-heavy Nasdaq and small-cap Russell 2000. All the major averages have suffered their worst week since October 2008, the midst of the financial crisis.

This is a different kind of crisis altogether. The blame for this unrelenting selling can be pinned squarely on the coronavirus. For months, investors cast a wary eye on the infectious disease, but kept their cool and didn’t panic.

What has changed? Perhaps news from concerned health agencies that the number of new cases outside China has eclipsed those inside China for the first time. Translation: efforts to contain the virus have failed. As of this writing, the Covid-19 outbreak has spread to 155 countries, infecting more than 190,000 and killing more than 7,500.

Those numbers seem to climb by the hour.

What This Means For The Market

Needless to say, restricting the movement of goods and people isn’t exactly conducive to commerce. And we’re starting to see the economic fallout. One closely watched Chinese manufacturing gauge just blared the lowest reading in 16 years. Another report suggests the toll on the airline industry could exceed $100 billion this year.

From supply chain disruptions to canceled exports, the damage that was once confined to the travel industry has spilled over into the broader markets. Shippers, retailers, oil producers… just about everyone is in the path of the storm.

The global economy was already in a fragile state, weakened by tariffs and trade disputes. If containment measures don’t hold and the dam is breached, then all bets are off. No less an authority than Janet Yellen, former Chief of the Federal Reserve, has said that recession is a real possibility.

For its part, Goldman Sachs is warning that S&P earnings growth may completely flatline in 2020. Even alcohol is a tough sell right now. Anheuser-Busch (NYSE: BUD) just forecast the steepest quarterly earnings decline in a decade.

I believe this is just the beginning of a wave of negative pre-announcements. Even for businesses not directly affected, it’s a ready-made excuse. Fortunately, consumer confidence is holding for now. But this contagion hasn’t run its course just yet; new cases outside China are still multiplying. And one quick glance at the 10-Year Treasury chart shows that anxiety is running high – yields just recently hit a new record low. 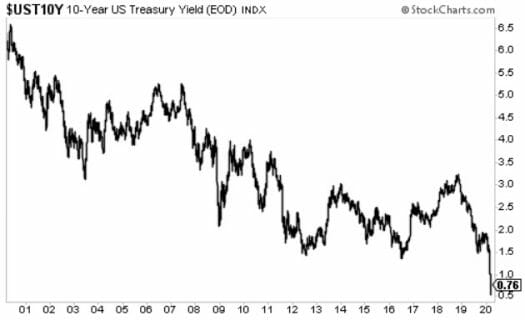 But it’s a great time to be holding one thing: gold. The rule is: the greater the panic, the more investors clamor for the yellow metal. That is, until just recently. Take a look at the chart below to see what I mean. In recent weeks, there was a stampede in gold, driving prices to a seven-year peak above $1,650 per ounce. A year ago, gold was closer to $1,300. But when chaos hit the market, gold took a steep dive, falling to $1,486 just recently. The culprit: margin calls. What we are witnessing is nothing short of an unwinding, as traders seek liquidity above all else. But soon, I predict they will return to the precious metal in the name of safety.

Should you be looking at precious metals? In a word, yes. But not just because of the coronavirus…

Geopolitics. Coronavirus. Recession. Take your pick of these wildcards. The more fears intensify, the greater the appetite for gold. Keep in mind, the metal is also an insurance policy against currency devaluation and inflation. It also tends to perform better ahead of falling interest rate environments. Already, investors are turning to the world’s central banks for stimulative rate cuts to prop up the global economy.

We just got an emergency half-point cut from the Fed. Not content to leave things there, they promptly took rates down to zero.

Bottom line, I don’t think this rally has run its course. Gold has always been a hedge against market volatility and a reliable store of value during times of macroeconomic distress. For perspective, the last time we saw a market rout like this in October 2008, gold eventually sprinted as high as $1,900 per ounce.

That’s a predictable pattern. According to State Street, gold has provided an average return of 6.3% during the last 14 equity market downturns, while the S&P lost -21.5%.

On that note, GLD isn’t a bad option for investors right now. But stay tuned, because I plan to delve deeper into gold soon, with a few suggestions for even better ways to profit.

In the meantime, I want to point you to another opportunity in precious metals…

My colleague Dr. Stephen Leeb showed me a very interesting picture recently. To most, it just looks like any old tree-covered hill. But there’s something currently hidden from view that could make early investors a fortune… A massive mineral deposit.

In fact, it could be one of the largest ever discovered. Geologists and precious metals experts estimate is worth $100 billion or more. To learn how you can get in on the profit bonanza, check out our brand-new special report.