As Interest Rates Rise, This Bank Should Be A Winner

As we get deeper into 2022, one of the biggest stories dominating the financial headlines will be interest rates. In January, the central bank officials confirmed they were on track for an aggressive rate-hike campaign. That should begin in March.

Currently, the fed funds rate is set at 0% – 0.25%. Rates have been that low since the Fed lowered them in response to the coronavirus. But now inflation is running about 7% year over year — the fastest increase since June 1982. The Fed has to respond. The market is largely anticipating at least three rate hikes in 2022, with some predicting a fifth or even sixth hike before the end of the year.

That would be the most aggressive rate hike schedule since the calendar flipped into the 2000s. Back then, Chair Alan Greenspan was working to tamp down the dot-com bubble.

The chart below shows more than 50% of the futures market is already expecting that the Fed will have raised rates to 1.75% – 2.0% by the end of the year. 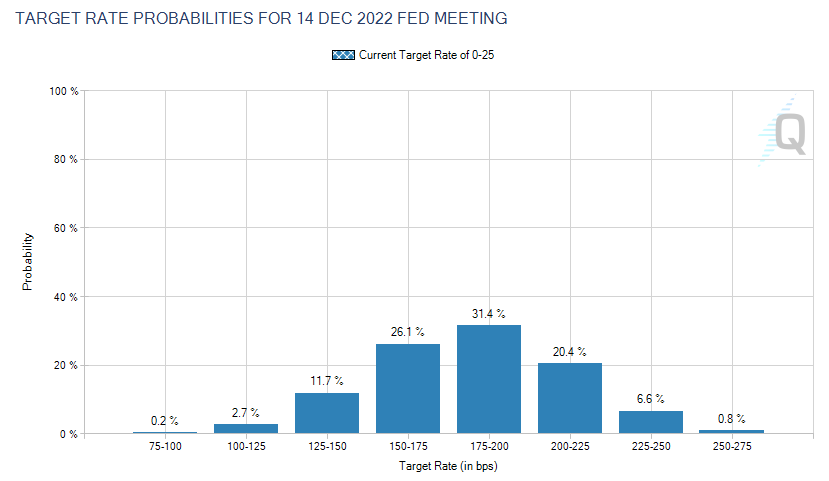 As rates go up, there will be winners and losers. Unfortunately, consumers could be among the biggest losers. The fed funds rate is the interest rate banks and major depository institutions charge each other for loans (which banks sometimes need to meet the Federal Reserve’s deposit requirements). Many credit card companies tie their rate to Fed policy, and car loans and mortgages are also likely to cost more.

Banks Could Be Big Winners As Interest Rates Rise

On the other end of the spectrum, we have banks, which should benefit from higher interest rates. One of the most important sources of a bank’s profits is the margin it charges on loans. This is the difference between the rate the bank pays to borrow money and the rate it charges when it lends money. At its most basic level, a bank’s business model is to borrow money at short-term rates and lend it out at higher, long-term rates.

As rates rise, banks can increase the size of their margins, and studies have found that higher rates boost banks’ profits. To test the theory, Federal Reserve economists looked at the relationship between higher interest rates and higher bank profits using data from 3,418 banks from 47 countries between 2005 and 2013. The analysts summarized the results in the chart below.

With rates almost certain to rise, banks are among the best investments in the market right now. Bank of America (BAC) offers a high-income opportunity in the sector.

Bank of America serves clients of all sizes, from the small all the way up to the very large (corporations and even governments). It also offers a range of services, including banking, investing, asset management, and other financial and risk management products.

Bank of America already had an incredible run-up in 2021. Its stock climbed 47% compared to the S&P 500’s 27% gain. But a number of analysts believe there’s still room for more gains.

In fact, back in January, the analyst team at Piper Sandler named BAC as its top stock pick for 2022. They also raised their price target on the stock from $54 up to $57.

The rationale behind their pick? Among the big banks, Bank of America is one of the most sensitive to interest-rate hikes. The market is expecting at least three hikes this year — minimum. BAC is poised to benefit more than peers as the Fed raises rates.

BAC is a great pick for longer-term upside in a high-interest rate environment. And we can use our covered call strategy to generate income while we wait for shares to get there.

Generating income from covered calls can act like gasoline on a fire when stocks are climbing.

Please don’t get bogged down in the fact that this is an options strategy. Like I mentioned, this is one of the most basic techniques out there. And in Maximum Income, I provide readers with a step-by-step guide on exactly how to execute each trade in order to generate extra income from the stocks that may currently be sitting idle in your portfolio.

Want to learn exactly how to get your portfolio working harder for you? I highly recommend trying a covered call strategy. I have a special presentation if you need help starting. It explains how to use this technique to receive monthly income on the stocks you own. You can view the presentation here.