Should You Buy The Most “Out Of Favor” Stocks On The Market?

Some of the best investments are the ones no one is interested in.

What everybody is talking about — or what’s “hot” — isn’t necessarily where you make money.

Consider this… During the dot-com bubble everyone was talking about and investing in red-hot tech IPO stocks. Then it all came crashing down and wiped everyone out. Same with the housing bubble leading up to 2008. Everyone was flipping houses. It was all anyone talked about. Of course, we now know that the vast majority of people ended up losing big.

The truth is what people want to hear usually isn’t always what they should be doing with their money.

Today, the popular investments that everyone is talking about are cryptocurrencies and “meme stocks” (think GameStop and AMC). These investments have soared in value since the pandemic bottom, and investors view them as an easy way to make money right now.

In fact, just about everything is working well right now. As I write this, the S&P 500 is up over 23% this year, while the tech-heavy Nasdaq is up around 18% and the Dow Jones Industrial Average is up by 16%. And every single sector is in the green this year.

While some corners of the market are clearly getting more attention and interest than others, it’s tough to find an area that investors aren’t thrilled about.

But if we move overseas, it becomes easier to find investments that investors aren’t interested in.

The Most Out-Of-Favor Stocks On The Planet

To put it bluntly, investors have turned their backs on Chinese stocks. The iShares MSCI China ETF, which holds a diversified basket of Chinese equities, has lost a third of its value since its peak in February. 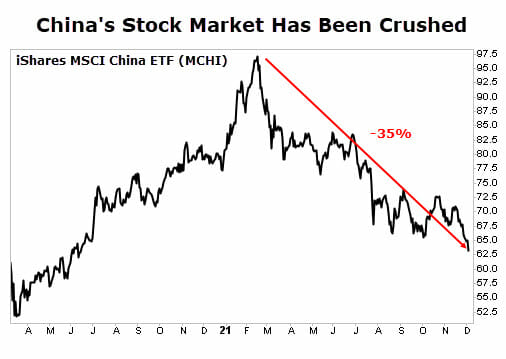 If we narrow in on Chinese tech stocks, it’s even more dismal. This basket of Chinese technology stocks is down more than 61% since peaking in February. And for good reason… 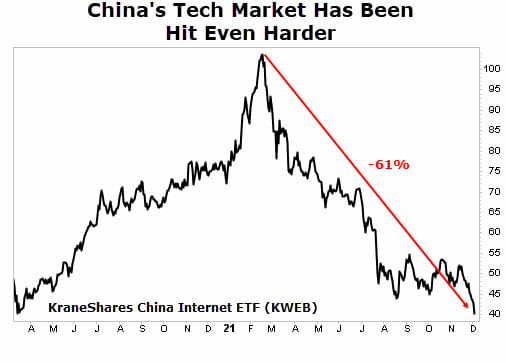 There’s been a lot of troubling news out of China recently, and not all of it stock-related. The country has been in the headlines for escalating tensions with Taiwan. Its largest real estate developer, Evergrande Group, is struggling with its inability to afford a mountain of debt. Human rights violations that have led to calls for possibly boycotting the upcoming Winter Olympics, as well as a purchasing boycott on cotton from the Xinjiang region.

But what’s really punished the country’s stock indexes has been the government’s regulation crackdown, which started around November 2020…

Back then, I told my Top Stock Advisor premium readers about how Alibaba (NYSE: BABA), the “Amazon of China,” had $68 billion of its market capitalization wiped away when the government stepped in and halted the IPO of Ant Group, a fintech firm that is owned by Alibaba.

I didn’t make much of it at the time, but I was wrong. After that suspension, Alibaba founder, Jack Ma, “disappeared” after he made public remarks snubbing China’s regulatory banking rules. Three months later Ma eventually popped back up…

Fast forward one year and Ant Group’s IPO is still in limbo. One month after halting the IPO in November, the Chinese government announced it was investigating Alibaba for monopoly-like behavior. In April, China slapped Alibaba with a $2.8 billion fine — the country’s largest antitrust fine on record.

It didn’t end there either… China’s government was just getting warmed up.

In June, China’s version of Uber, DiDi (NYSE: DIDI), went public on the New York Stock Exchange. The IPO went off without a hitch, because the IPO was happening in the U.S. and Chinese regulators couldn’t stop it as easily. But a few days after the IPO, China’s cybersecurity arm banned new downloads of DiDi’s app in the country, accusing DiDi of improperly collecting and using data. 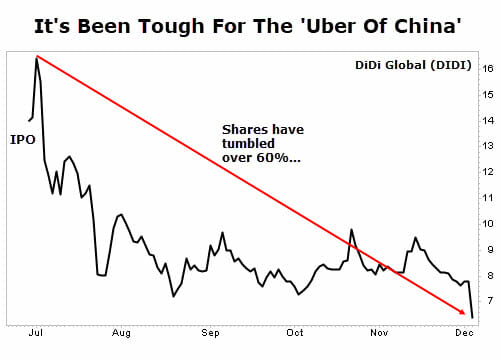 Then in July, Chinese regulators took a hammer to the $100 billion for-profit education-tech sector. They banned these companies from making profits, raising capital, and going public.

As you can imagine, when you can no longer make money, investors don’t want to invest. Shares of the two largest companies in the space, New Oriental Education & Technology (NYSE: EDU) and TAL Education (NYSE: TAL) were decimated: 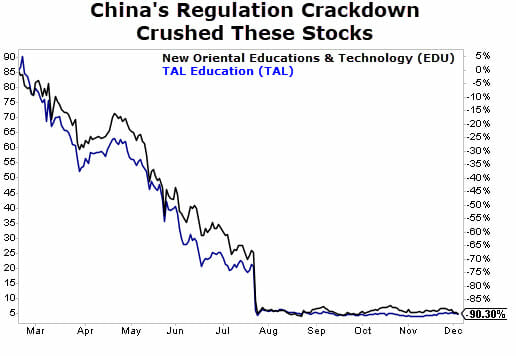 Shares of both are down around 90%.

It May Sound Crazy, But Hear Me Out…

The swift regulations that can be brought down by the Chinese government has always been a massive risk to consider. But I have never seen action taken with such precision and magnitude like we have seen in the past year or so.

Nobody is talking about them, nobody is interested in them, and nobody wants to own them. But that sentiment leaves us with an incredible opportunity…

Now before you shrug me off, you need to know that a big piece of successful investing revolves around understanding human behavior. The emotions that are involved with making and losing money. How we react (or don’t react) to certain information and events.

That’s where we’re at with China. Sure, more regulation could be coming, but investors are already used to bad news out of China. They’ve given up hope altogether, which gives us a nice opportunity for big upside with limited downside risk.

That’s why we made the decision to wade back into China with one stock in particular over at Top Stock Advisor.

Does it sound a little crazy? Sure does. But most big winners sounded crazy at one point in time. Buying the most “illogical” stocks during the “worst” time is something most investors don’t have the gumption to do. But the ability to zig when everyone else is zagging is a rare trait that can lead to some big-time winners.

Sure, I could be wrong with this one, but that’s why we’re using a tight stop-loss with our position. At this point, there’s not much to lose, and the rewards could be huge.

Editor’s Note: Elon Musk just made a MASSIVE announcement about his latest innovation…

Musk broke the news that his latest project will come out of its beta-testing phase soon. And the second it goes “live,” it promises to be the beginning of a new era for internet. And while the tech behind this secretive project is impressive… it’s an even better opportunity for your portfolio.

Discover how to profit from Musk’s big reveal in my latest report right now.