4 Top Buffett Strategies To Be A Better Investor

We talk a lot about Warren Buffett in the pages of my premium newsletter, Top Stock Advisor. And for good reason.

Buffett is obviously one of the richest men in the world, worth an estimated $104 billion. But it’s not just because the guy is a multi-billionaire that we often cite him. It’s how he made his fortune…

Handily for us, Buffett made virtually all is wealth through investing. And he’s provided a journal — a manuscript, if you will — of exactly how he’s done it by way of his annual shareholder letters.

Everyone has access to these writings. You can access them all right here. They don’t cost a dime. And they teach you everything you need to know about the way Buffett invests. (After you’re done reading this essay, do yourself a favor and go bookmark that link. Read the shareholder letters at your leisure and you can thank me later.)

Yet, despite all that, most people fail. They think they have it figured out, but they’re unable to replicate Buffett’s success.

So, what exactly is his secret?

This first strategy isn’t a valuation metric or a specific number. You won’t find it on any financial statement (we will get to that one). It’s the lesson he learned after purchasing — and prematurely selling — his first stock at the age of 11. And one that he’s carried with him since then.

If you’ve done your due diligence and purchased a great company at a fair price, then you can’t get scared when it misses quarterly expectations. Or worry about what the financial media is saying.

Great companies reward shareholders who have the patience to stick with them. After Apple’s (Nasdaq: AAPL) market cap pierced the $1 trillion mark in August 2018, BusinessWeek did something you don’t typically see these days… In an admirable show of self-deprecating humor they resurrected the cover and cover-story from 1996 that predicted the “sad decline” of this “American Icon.”

It’s also worth noting that investors who purchased shares in Berkshire Hathaway (NYSE: BRK.A) on that day 24 years ago have beat the S&P 500 by more than 2-to-1.

This next strategy is something that isn’t talked about much, but probably should be. It’s simple and (relatively) easy for all of us to do. And something that Buffett has been doing since he was 5 years old: Work Hard, Save Harder.

Buffett is an avid worker and entrepreneur. He also developed a knack for saving at a young age. Buffett would buy a six-pack of cola from his grandfather’s store and then sell each bottle individually, making a five-cent profit on each six-pack. He’d do a similar thing with packs of Juicy Fruit chewing gum.

Recall that by age 14, Buffett already had saved more than $1,200 (which he used to buy farmland). Buffett was always looking for ways to bring in more income. At one point he was managing a total of five partnerships. And he worked hard to save as much as he could. By his early 20s Buffett’s savings had climbed to $9,800, and by age 26 they swelled to $140,000. (That was a lot of money back in those days…)

While the vast majority of Buffett’s wealth today was created from his investments, it was his habit of saving that had him two steps ahead of everyone else. It takes great discipline to create a stockpile of cash. Many professional investors will tell you that if you can’t focus on building your savings, it will be tough to successfully build wealth through investing.

Buffett continues to stockpile and save cash even today (and he continues to work hard at age 89). As it stands now, Berkshire Hathaway has about $137 billion stashed in its corporate coffers. 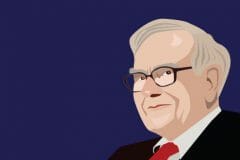 Now we can get into some fundamentals… Buffett has long been known as a value investor. But a couple of decades into his investing career, he changed his value tune ever so slightly. Buffett realized that while there were plenty of stocks trading for less than liquidation, not all were a good value. Case in point: Berkshire Hathaway.

Buffett had tired of picking up these value-plays that never reached their full potential. Whether it was due to poor management or execution, it became frustrating. There had to be a better way.

Buffett stopped reaching for the proverbial “falling knife” and started looking at companies that produced a good or service that would be around for the long haul. Not only that, he started focusing on companies with an unusually high return on net tangible assets, and companies that continually grow book value.

Now before I go any further, let me jump to Buffett’s fourth strategy, as it pairs nicely with number three…

Buffett sums up his process for what he looks for in investments in nearly every single annual letter. Here’s what he said in 2017:

In our search for new stand-alone businesses, the key qualities we seek are durable competitive strengths; able and high-grade management; good returns on the net tangible assets required to operate the business; opportunities for internal growth at attractive returns; and, finally, a sensible purchase price.

In today’s market environment, it’s not easy to find companies that meet some of these criteria. This is one of the main reasons why Berkshire Hathaway hasn’t made any sizable acquisitions in the past few years.

But other things we’ve discussed here (like patience, having a stockpile of cash) are steps that any investor can take in any environment.

The truth is, it’s not easy winning long-term investments — you have to really do your research. Thankfully, my research staff and I over at Top Stock Advisor have that covered…

In fact, I recently found something that you should take a look at…

I regularly read through SEC filings, and it’s normally pretty tedious work. But I found something in a tiny footnote of one company’s report that leaped off the page. And suddenly, I was once again reminded why this is all worth it.

I’ve got all the details in my latest report. But what I can tell you right now is that it has to do with a little-known satellite technology company that may have scored the deal of the decade.

Go here to get the details right now…