This Indicator Says The Market Is… Cheap?!

By now, you’re probably used to hearing people say that the market is expensive. At first, that makes sense. After all, stocks have been on a tear since March of 2020, and traditional valuation metrics like the price-to-earnings (P/E) ratio seem elevated.

But as I’ll explain in a moment, things are not what they seem. By adding just a little context to account for the Fed’s monetary actions (particularly in the bond market), we can get a better idea of whether the stock market is overvalued — or cheap.

First, however, let’s talk about the other half of the P/E ratio: earnings…

Earnings season is still underway. Just under a quarter of the companies in the S&P 500 Index (23%) have reported results for the third quarter. So far, the results look bullish. Strong earnings should set the stage for continued gains in the index. Analysts now expect record EPS of more than $200 for the S&P 500 and over $220 next year. Based on next year’s estimated earnings, the S&P 500 is trading with a price-to-earnings (P/E) ratio of about 20.

Based on current interest rates and trends in earnings, that is a low valuation. Here’s why…

What The Earnings Yield Tells Us About The Market

A P/E ratio of 20 is equivalent to an earnings yield of 5%. The earnings yield is the inverse of the P/E ratio. By thinking of earnings in terms of yield, we can see a direct comparison to bonds.

Ten-year Treasury notes are the traditional alternative to stocks. This is the yield Warren Buffett has used to explain his investment methodology. That rate is now at about 1.6%. 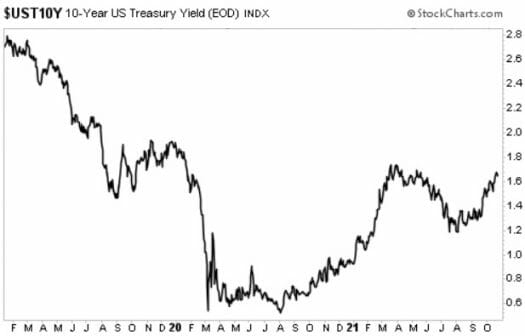 I believe interest rates are artificially low because of the Federal Reserve’s interventions in the bond markets. As the Fed dials back its quantitative easing programs, it’s likely the yield on 10-years will move toward the rate of inflation. I believe it’s reasonable to expect it to be about 3% in the next year or so.

If 10-years yield 3%, stocks should have an earnings yield a little higher than that. That’s because stocks are riskier than Treasury securities and investors should earn more on their stock market investments. An earnings yield of 4% is reasonable, which is equivalent to a P/E ratio of 25.

Now, here’s the part that may surprise some of you. Based on expected earnings, a P/E ratio of 25 provides a price target of about 5,500 for the S&P 500, about 20% above current levels.

This means we could have quite a bit of room to run in this bull market. Based on this, as well as other factors (like improving investor sentiment), I’m growing more optimistic about the stock market every week. I wouldn’t be surprised to see even higher levels in the S&P 500.

Not only is this good news for traders, but it’s also good news for growth-oriented investors. And my colleague Jimmy Butts and his team have found one of the biggest growth opportunities I’ve ever seen…

They’ve released a “shocking” report about Elon Musk’s secretive Starlink project — and how you can profit. The billionaire entrepreneur is slowly taking a step back from Tesla — and we think we know why. After extensive beta testing, Starlink is about to go “live” soon — and it could be his latest “game-changer,” just like PayPal, Tesla, and Space X.

Even though Starlink is “off-limits” to regular investors (for now), we’ve uncovered a “backdoor” that gets you in on the ground floor… lightyears ahead of other investors.

Go here now to see how…