Inflation Is Looming… Are You Prepared?

Good news for those of you on Social Security: As my colleague Brad Briggs pointed out a few days ago, your monthly checks are about to get a little larger…

Uncle Sam has approved a 5.9% cost-of-living adjustment (COLA) for 2022 — the sharpest increase in 40 years. The average recipient is currently taking home about $1,550 per month, so the adjustment will provide a $90 bump beginning in January.

Over the past decade, seniors have seen a modest 1.4% annual hike in their checks. This increase is more than four times the norm, the biggest spike since 1982.

But is that really a good thing? After all, these benefits are meant to keep pace with inflation so recipients on a fixed budget can maintain their standard of living. Washington isn’t being generous here… it is tacitly acknowledging that consumer prices are soaring at the fastest pace in four decades.

The COLA adjustment is tethered to a subset of the Consumer Price Index, specifically a basket of “urban worker” goods and services. This particular index doesn’t always sync with the rising out-of-pocket expenses for Social Security recipients, who typically spend more on prescription drugs and Medicare premiums.

In any case, that extra $90 will quickly get eaten up by the rising cost of groceries, insurance, utility bills, and other basic necessities. In real terms (not nominal), there will be little to no increase. In fact, a senior citizen advocacy group calculates that Social Security recipients have suffered a 32% net decline in spending power since 2000.

It’s a bit like trying to walk up the down escalator.

[Related: This Troubling Chart Lays Out The Problem With Social Security]

Social Security was meant to be a supplemental safety net. But sadly, for one-in-four retirees, it’s their sole source of income.

Fortunately, those of you reading this have most likely taken matters into your own hands. So if you’re one of those folks, then give yourself a pat on the back. History has shown conclusively that a prudently managed portfolio (harnessing the power of compound interest and reinvested dividends) is the surest way to systematically build wealth and achieve financial independence.

What The Latest Inflation Data Means For Us…

Bear with me, the inflation talk is almost done for today. We’ve discussed it enough the past few months (albeit for good reason). But I would be remiss not to mention the latest reinforcing batch of fresh new data. 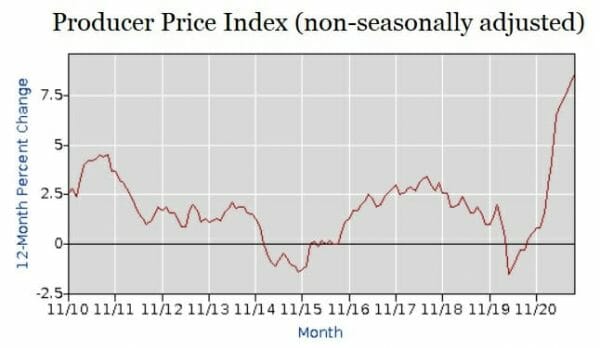 And, of course, that has spilled over into the consumer level. The latest CPI reading showed alarming increases for beef (up 17.6%), natural gas utility service (20.6%), used vehicles (24.1), and everything in between.

But it’s only temporary, right?

The best anecdote I’ve heard comes from an influential economist who put a jar labeled “transitory” in his office. Likening it to a swear jar, he insists that anyone caught muttering that word must deposit a dollar. As we all know, transitory is the term du jour at the White House and among many policymakers.

So who does this dissenting opinion belong to? None other than Dr. Raphael Bostic, President of the Atlanta Branch of the Federal Reserve (and a voting FOMC member). His comments have been echoed in the private sector by authorities such as Jamie Dimon, the CEO of JP Morgan Chase (NYSE: JPM).

Here’s what the head of the nation’s largest banking clan had to say:

“We’ve been effectively stockpiling more and more cash waiting for opportunities to invest at higher rates. We’re going to be very patient, because I think you have a very good chance inflation will be more than transitory.”

For the record, JP Morgan Chase is expecting to haul in $52 billion in net interest income this year. That’s down slightly from an earlier forecast of $55 billion, largely because of the strategic shift into safer, but lower-yielding cash equivalents and short-term securities.

Still, this could be the low-water mark for earnings. If you can call $50 billion low.

The point is, there is a crescendo of voices (including some from within the Fed’s own inner circle) who believe the time has come to act. That means tapering monetary stimulus and tightening interest rates. Even without Fed intervention, rates have already been moving higher of their own accord. Two-year Treasury yields just touched the highest levels since March 2020, the early days of the pandemic. And 10-year notes (which influence mortgage rates and other borrowing costs) have doubled from 0.74% a year ago to 1.60% today. 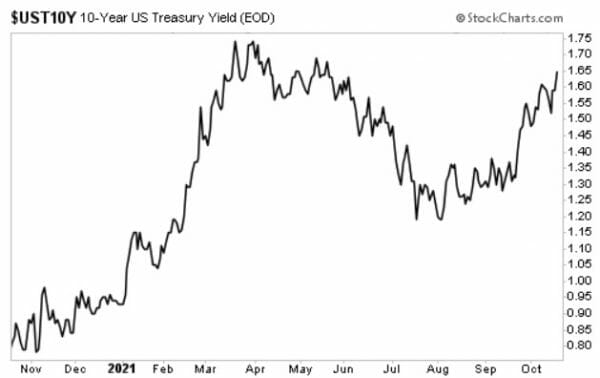 We’ve Prepared For This… Have You?

Of course, we’ve been preparing for this eventuality over at my High-Yield Investing premium service. We’re avoiding the long-end of the yield curve (the most rate-sensitive), overweighting durable hard assets such as commodities and real estate, and taking positions in businesses (like our insurance giant holding) that stand to benefit from rising rates.

If you haven’t taken any of these measures just yet, that’s okay. There’s still time.

For most of the rest of us who aren’t quite into our retirement years yet, we still have a bit of a hill to climb to get to where we want to be. It’s definitely achievable. It just isn’t getting any easier, especially if you’re inching closer to retirement and looking to shift your portfolio towards income over growth. After all, the average yield of an S&P 500 stock is less than 2%. But the quality high-yields are out there if you know where to look…

Your main takeaway should be this… in this low-rate inflationary environment, it’s never been more important to have at least a few holdings paying income that keep up with (or exceed) the pace of inflation over time.

And if you’re looking to put your portfolio on the right track, then you need to see this…

I put together a report for readers who want a simple approach to a successful retirement. In it, you’ll find 5 safe high-yield “bulletproof” stocks that you can own for the long-term… In fact, these picks have weathered every dip and crash over the last 20 years and still handed out massive gains.

With these picks in your portfolio, you may never have to worry about what the market is doing again.

Go here to check out my report now.