Beam me up, Bezos.

Okay, I’m almost certain that line was never spoken. What a wasted opportunity…

At approximately 10:50 a.m. ET, the New Shepard suborbital rocket took off from the launchpad in West Texas, ascending roughly 65 miles into the atmosphere. And just like that, Shatner became the oldest person to go into space. The beloved television icon and his three crewmates experienced a brief period of weightlessness before coming back down.

All in all, the trip lasted a little over 10 minutes.

This may seem like a novelty to some of our more skeptical readers. I get it. But consider for a moment Shatner’s first reaction after coming back to Earth — and then think about the implications of commercial space travel.

“What you have given me is the most profound experience I can imagine… It’s extraordinary, extraordinary,” said Shatner after the mission, according to ABC News.

You can bet there will be more and more people lining up to follow in Shatner’s footsteps. And they’re going to pay up, big time.

But this is about much more than just space tourism. In fact, there are billions of dollars being plowed into all facets of the commercial space industry. And there are already a few ways for us to potentially profit…

Billions Are Being Invested In The Space Race

While watching nonagenarian TV stars blast into space is cool, what’s even more exciting is the amount of money pouring into the emerging commercial space sector. More than $231 billion in the last 10 years, in fact.

Space Capital, a venture capital firm that focuses on early-stage space technology, released a fascinating third-quarter report on space investment. You can go here to download the report, but I’ll give you the highlights… 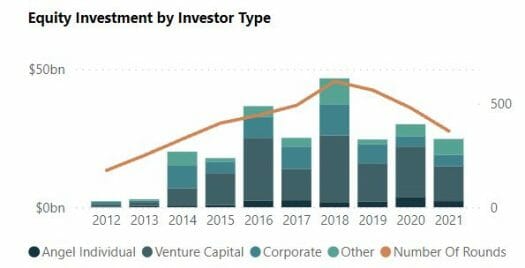 While more investment in this is interesting, what’s even more interesting is increasing access in the public markets for individual investors like you and me.

The report notes that no less than six space companies were listed on market exchanges in Q3 through SPAC mergers. Seven more are on the horizon, according to the report. I won’t go into the mechanics of how SPACs work in this piece (although my colleague Jimmy Butts has covered this). But what’s important to know is that these vehicles, while opening up access for investors, can also be somewhat volatile.

Still, the main takeaway is that the space industry is gaining more and more traction. This is no longer in the realm of dreams within the pages of a SciFi book or television show. We’re talking about real business here, folks.

As my colleague Jimmy Butts has been telling his Top Stock Advisor subscribers for the better part of a year, institutional investors, tech companies, military firms, and other private institutions are piling money into the industry. They know the playbook, and they’re salivating at the returns that could follow.

Now, if you want to look into the growing list of publicly traded space-focused companies out there, that’s great. Just know that you’re taking a flier on an emerging industry that’s still in its infancy. It will be volatile. There will be growing pains.

But the potential rewards could be tremendous. So if you don’t want to be in the business of picking winners — at least not yet — then we recommend looking at two tickers: ARK Space Exploration & Innovation ETF (ARKX) and the Procure Space ETF (UFO). Both of these funds have their benefits and drawbacks, and each has different focuses on aspects of this industry.

Of the two, my colleague Jimmy Butts has a favorite that he shared with his Top Stock Advisor readers in a special report. And for those looking for even more potential upside, he’s also identified his absolute top equity pick for benefiting from the billionaire space race.

You can get all the details on his research in this emerging mega-industry right here.