This Stock Could Be The Next Big Video Game Powerhouse

Most people don’t realize just how big the video-game industry is… or how fast it’s growing.

But consider this… The gaming industry is already two times larger than Hollywood. And it’s getting bigger every year.

I’ve written about the amazing growth that’s happening in the video game sector for a couple of years now. That’s because I believe it’s one of the market’s best growth stories — yet for some reason, investors (older ones, especially) seem to be ignoring it.

That’s a shame, because the gaming space is expected to reach $200 billion by 2022 — and grow at a compounded average growth rate of 21% for the next few years.

Needless to say, this is a huge — and growing — market with massive tailwinds. Yet, hardly anybody is talking about it. But that’s okay, because while this massive market is being ignored, savvy investors could be pocketing massive returns.

There are a number of ways you can take advantage of this promising industry. You could invest in the “big boys” like Electronic Arts (Nasdaq: EA), which makes popular franchises FIFA soccer, Madden NFL, Apex Legends, and the Star Wars series Battlefront. Then there’s Activision Blizzard (Nasdaq: ATVI) which produces games like World of Warcraft, Call of Duty, Candy Crush, and Overwatch. 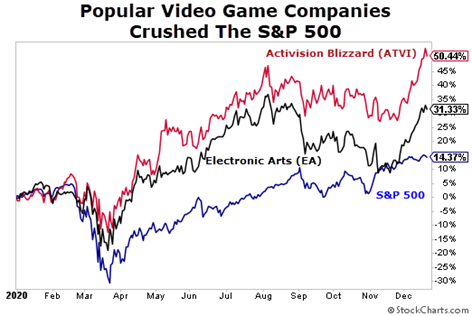 There are also quite a few smaller players in this space that have good prospects. But one of the companies I like best is one that you’ve likely never heard of… Skillz (NYSE: SKLZ).

It’s okay if you’ve never heard of this company. It just went public in December 2020. To cause a little further confusion, it went public via a special purpose acquisition company, or “SPAC.”

You may have heard about SPACs in the financial news lately, as they gained a lot of popularity last year. Now, I won’t get into the details of the inner workings of how SPACs work today, but just know that Skillz went to the market via a SPAC.

The point is that Skillz is not one of the big players in this space — yet.

Skillz provides a platform to turn any mobile game on iOS and Android into one you can play with friends or strangers for cash, prizes, or points. It also enables esports tournaments for games that are integrated into its platform.

The company announced a significant coup back in February, signing a multi-year agreement with the NFL to host a competition for mobile developers to create an NFL-themed mobile game. As we all know, football is big business in America, and if the competition is successful, then Skillz could play a big part in extending the NFL brand to a younger audience.

In the meantime, the company released second-quarter results on August 3. It produced revenue of $89.5 million during the second quarter of 2021, which was 52% higher than the prior year. Gross profit was $85.1 million (up 52%), giving the firm a cushy gross margin of 95%.

It should be noted that the company did lose $79.6 million during the quarter, but it has a clean balance sheet. At the end of the second quarter, it had $692.8 million in cash and zero debt.

The company boasted 2.4 million monthly active users during the quarter, which was down slightly from 2.6 million in the prior year. But the good news is that the company is doing a great job at translating those users into revenue. It generated $12.46 per active user in the quarter, compared with just $7.69 the year before.

Another key metric, gross marketplace volume, represents the total entry fees paid by users for contests hosted on Skillz’s platform. This figure grew to $609 million compared to $413 million in the prior year.

To be sure, this investment isn’t for the faint of heart. It just went public in December and doesn’t turn a profit. The stock is heavily shorted and has seen outsized volatility. So you must be able to stomach wild swings in share price.

As a matter of fact, I first wrote about SKLZ in a report for my Top Stock Advisor subscribers in late 2020. The stock more than doubled in the following month. However, since peaking in February this year, shares have tumbled back to where they were when I first recommended the stock.

But if you’re willing to take the volatility in stride, then it makes some sense to dedicate a small portion of your “growth” portfolio to this stock. As the first mobile esports platform to go public, it should be in a prime position to take advantage of the booming video game and esports space.

P.S. I recently found another one of the market’s best-kept secrets — and it’s one of the most exciting (and profitable) opportunities I’ve ever seen…

My research team and I discovered a little-known satellite company that quietly purchased an Internet tech startup at a bargain basement price. But most analysts on Wall Street completely missed a key detail about this transaction that could lead to a huge windfall for years to come.

Savvy investors will want to get in now before the “crowd” catches on. Go here to read the full report before it’s too late.