Send This Image To Your “Buy-And-Hold” Friends…

Imagine you’re at a summer backyard cookout. You gather around the grill, crack open a cold one, and while watching the meat sizzle on the grill, the topic comes around to the stock market.

Let’s say the market has been throwing a fit lately. But one person chimes in, saying he’s not concerned about the recent market volatility because he’s a “buy-and-hold” investor.

That may sound smart on the face of it. And I certainly don’t want you to start any trouble… But I think most people’s perception of “buy and hold” is flat out wrong. And if I’m at that cookout, I might politely remind him of two letters: G and E.

As in General Electric (NYSE: GE). Allow me to explain…

The Cost Of Buy-And-Hold Can Be Painful

You see, the market doesn’t care how fantastic your stocks are. If you blindly believe that in the long run your favorite stock will appreciate, just think about GE.

This company is the bluest of blue-chips. It’s iconic. We are talking about the firm founded by the likes of Thomas Edison and J.P. Morgan in 1892. A company responsible for making everything to jet engines to refrigerators.

In other words, an American institution.

Of course, we all know about the company’s troubles over the past few years. They’ve been well-documented. Yet despite all that, it has still managed to generate $78 billion in sales over the past year. But the truth of the matter is that this stock has been a “problem child” for quite some time — a lot longer than most people would think.

I’m going to show you a chart that is going to blow your mind. You see, GE shareholders have been treated to some of the worst volatility I’ve ever seen over the past 25 years. I even had to adjust this chart to a log scale so you can truly understand how wild of a ride it’s been… 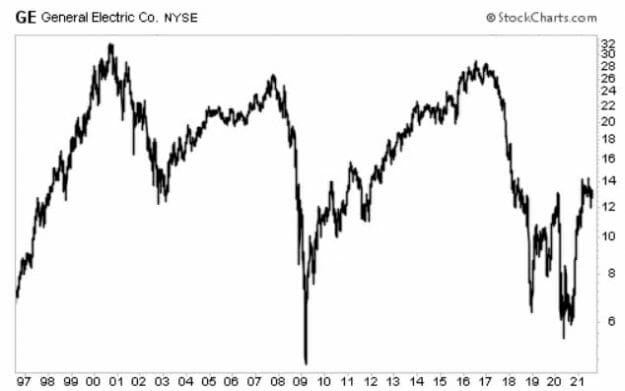 This is what anyone who has held on to GE shares for the past 25 years has been subjected to.

Is there any individual investor alive with guts like that? If so, I’d like to meet them…

Remember, we’re not talking about some fly-by-night company here. Sure, there were times investors could have hopped off the GE train and booked a tidy profit. But if you followed the same old line of “buy and hold” thinking, at what point were you supposed to know when to jump off?

Remember, hindsight is everything. And those who blindly held on were treated to one hell of a ride. The stock has delivered at least four EPIC meltdowns during this time span.

I don’t blame a single person for dumping their shares during any one of those tumbles. Many of those investors were likely better off in the long run.

It’s the people who held on for dear life that I really feel for. That’s mainly because investment decisions are usually controlled by emotion, not logic. We tend to be overly defensive about the stocks we own. And a good many individual investors justified their owning GE over the years by reminding themselves of the company’s storied history, it’s reputation, etc.

Some companies are indeed worth holding “forever.” Until they aren’t. It’s usually only when you’re out of a position that you see things in technicolor.

Not All It’s Cracked Up To Be

I know I sound like the proverbial broken record when I talk about this topic. But the fact of the matter is that I worry more about the risks investors are taking than anything else. It’s dismaying to me that many “conservative” investors practice a (misunderstood) buy-and-hold approach to the market, failing to realize the risks of that strategy.

Here’s what I mean…

Buying a stock should always involve some consideration of value. Whether it’s robust cash flow or even something as simple as a low P/E multiple, it’s always important to have an educated guess about what your investment will be worth down the road. Unfortunately, unlike the man they are professing to follow (Warren Buffett), many buy-and-hold investors ignore value.

That’s because they are fixated on investing for the long-term, come hell or high water.

I literally cringe when I hear about someone losing money in the market. That’s because it’s usually due to misunderstood philosophies, a nonchalant attitude, or simply ignoring the risks they are taking.

But don’t get me wrong. As much as I bash buy-and-hold investing, it can work… if you follow some simple rules. You still have to have a sell signal in place to preserve capital.

Here’s the reality… Followers of this blind buy-and-hold strategy are accepting astronomical risks without realizing it. In the case of GE, they lost the most valuable and irreplaceable thing when it comes to investing and building wealth: time. These investors seem to accept these risks — the risk of losing 25 years of time — with very little to show for it.

Imagine if these “buy-and-hold” investors had followed a simple 25% trailing stop-loss strategy. From 1997 until GE’s first 25%-plus pullback in 1998, they would have locked in a triple-digit return… and avoided the dot-com bubble.

In fact, let’s just say you believed in GE over the very long term. You could have bought the stock at numerous points, and by employing a simple 25% stop-loss, your chances of success would have been pretty good…

The reason I talk so much about risk management and cutting losers short is that I know how hard it can be. It’s tough to sell a stock for a loss. Most traders would rather hold onto a loser than admit they are wrong (which is what you are doing when you cut a loser). The thinking is always, “I’ll get out when I’m back to even.”

Your pride and ego take a hit when you sell a loser. But you have to get that sort of thinking out of your head if you want to be successful in the stock market. Once you realize that making money is more important than your pride or ego, you will be on your way to becoming a more successful investor.

P.S. If you’re looking for the kind of guidance and picks that can change your portfolio in a meaningful way, then I encourage you to check out what we’re doing over at Top Stock Advisor…

In fact, I’ve got my eye on an area of the market that could make investors an absolute killing in the months ahead — and it has to do with the new space race that’s taking shape right now. Billionaire investors like Richard Branson, Elon Musk, and Jeff Bezos are already making waves… Not to mention a handful of lesser-known companies and private investors.

The good news is that you and I can get in on this race, too, thanks to a secret “backdoor” way we can piggyback on one of SpaceX’s latest projects.

Go here to get the details now.